skip to main | skip to sidebar

well, here we are at the third and final reveal! i'm so excited to be here! thank you lori anderson!!! you are a true angel, and you will soon find out why.

my partner is eileen snyder. here is her blog, and here is her shop. there was a little hiccup in our part of the party. eileen and i were slated for the first reveal, but eileen's package to me got lost in the mail, and ended up back at eileen's! but before it had appeared, i contacted lori and said i wouldn't be able to do the party, and she very kindly sent me a soup! and *then* the package appeared at eileen's and she sent it back to me, and then i had ***two*** soups. um, wow!!!

some of you might recall my soup from eileen. here it is. 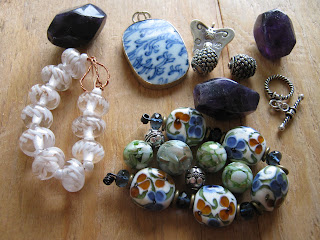 i was really inspired by the flower beads and the butterfly to go with a garden theme. and since it's still summer and we've still got flowers i thought it would be perfect.

the first piece i took on was the pottery shard pendant from china. i really like handmade elements, so i added some of my polymer clay to eileen's soup. 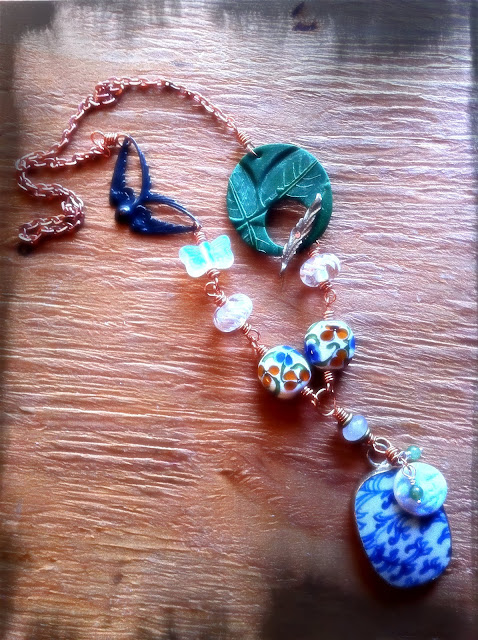 i added the chain, the b'sue boutiques bird, the butterfly, the polymer clay clasp and face, the jade drops, and the gray rondelle. everything else was from the soup. 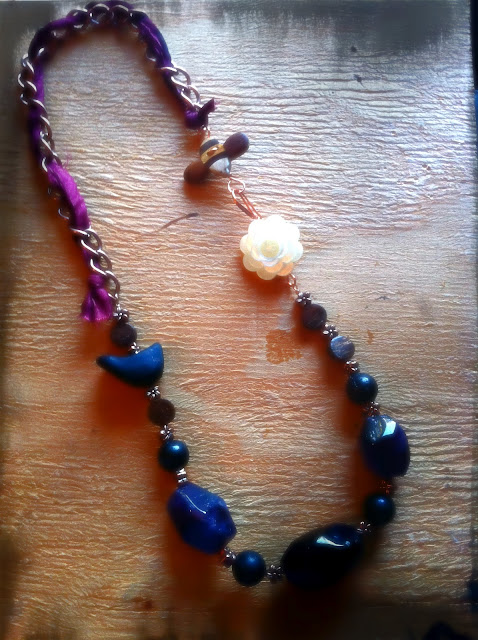 next i worked on the luscious amethyst chunks. i added everything but the amethyst; lava rounds, wood disks, copper flowers, chain, silk sari ribbon, the polymer clay bird, and the button clasp i made to follow the garden theme. 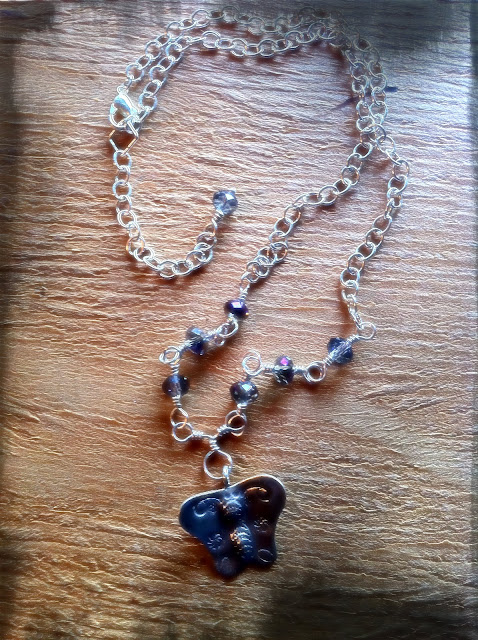 i wanted to keep the butterfly light and delicate, so i just added a few crystals and some chain. that new y-connector is something i worked out a couple weeks ago. i'm sure others have done it, but boy did i feel smart when i came up with it! ;) 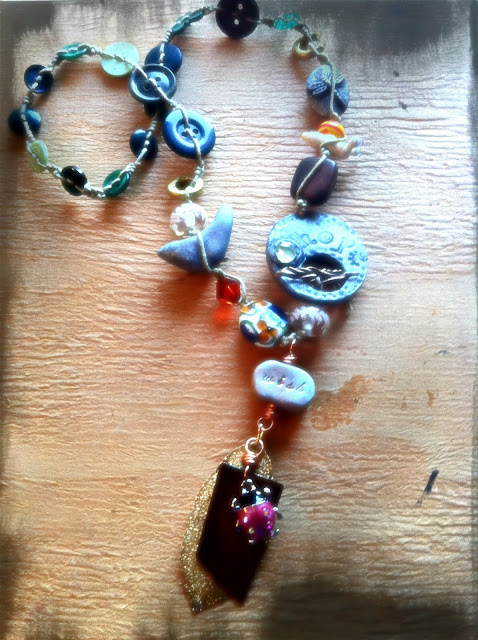 here i was thinking lush vintage garden with some weathered statues, happy bugs, and some stately old trees, with a silvery magical bird living in it. i used that gorgeous orangey-red crystal from lori's soup, and the flower bead and the two clear and white beads from eileen's soup. i added everything else. i made the copper etched pendant, the wish bead, the hope clasp (in signifigance for what it feels like to plant such a garden), and the magical bird. i used cotton cording to do the micro-macrame, which i've just started to do. the little lampwork snail is by doris stumpf. we exchanged beads in the pantone palette bead exchange. the buttons are all from the soho garment district. 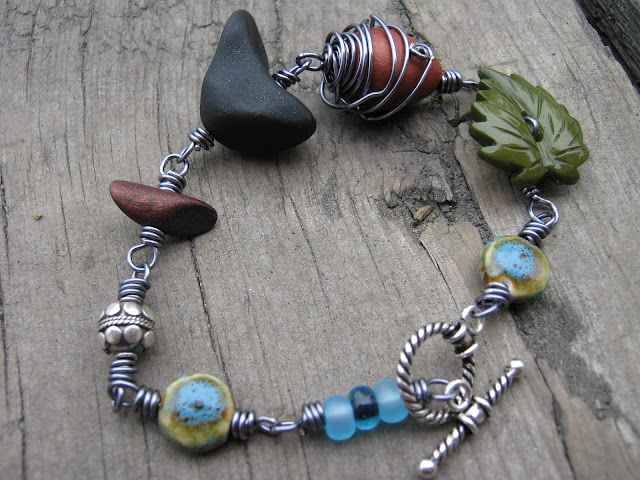 and finally from eileen's soup is the clasp and the silver bead. i made the polymer clay bird and nest, added the plastic leaf button, the ceramic beads, the wood bead, and the glass seed beads.

so that draws us to the close of eileen's soup. on to lori's! 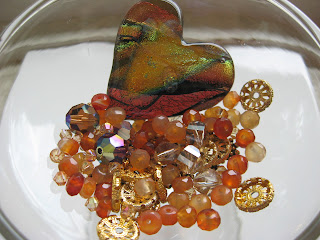 i was thinking sparkly and effervecent for this one, and romantic. so i chose glossy black wire and chain and lobster clasp. and i took a cue from heather powers and some of the pieces i've seen her do. it's so lovely how she uses rhythm in her work a lot, and i wanted to evoke that. so i did some repeating and grouping. 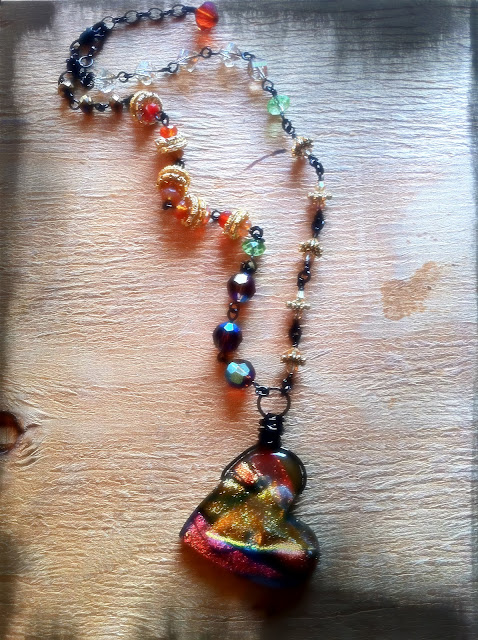 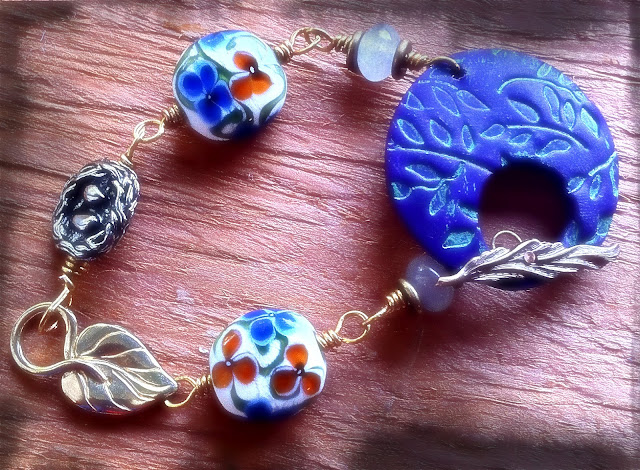 and here is the gold leaf clasp that lori sent. i used it as a link and added my polymer clay clasp, the two flower beads from eileen's soup, and a nest i bought at jo-ann's. i stuck with the garden theme from eileen's soup here, and was thinking of a tree twined with flowers and a little nest safe in it's arms.

i hoped you liked this stop on the party line! i know i thoroughly enjoyed working with eileen's and lori's soups! you're both the dearest people. now on to the next blog!

i heart you back!

indigo heart
Fairbanks, Alaska, United States
i'm an artist trying to find her way in this world. i'm a writer, a visual artist, a jeweler. i'm an explorer and a survivor, a recovering addict and a seeker of beauty. i search for meaning and truth and joy always, in every little moment.

The Next Always
by Nora Roberts

my books at goodreads

Wrapt in Crystal
by Sharon Shinn

The Thirteenth House
by Sharon Shinn